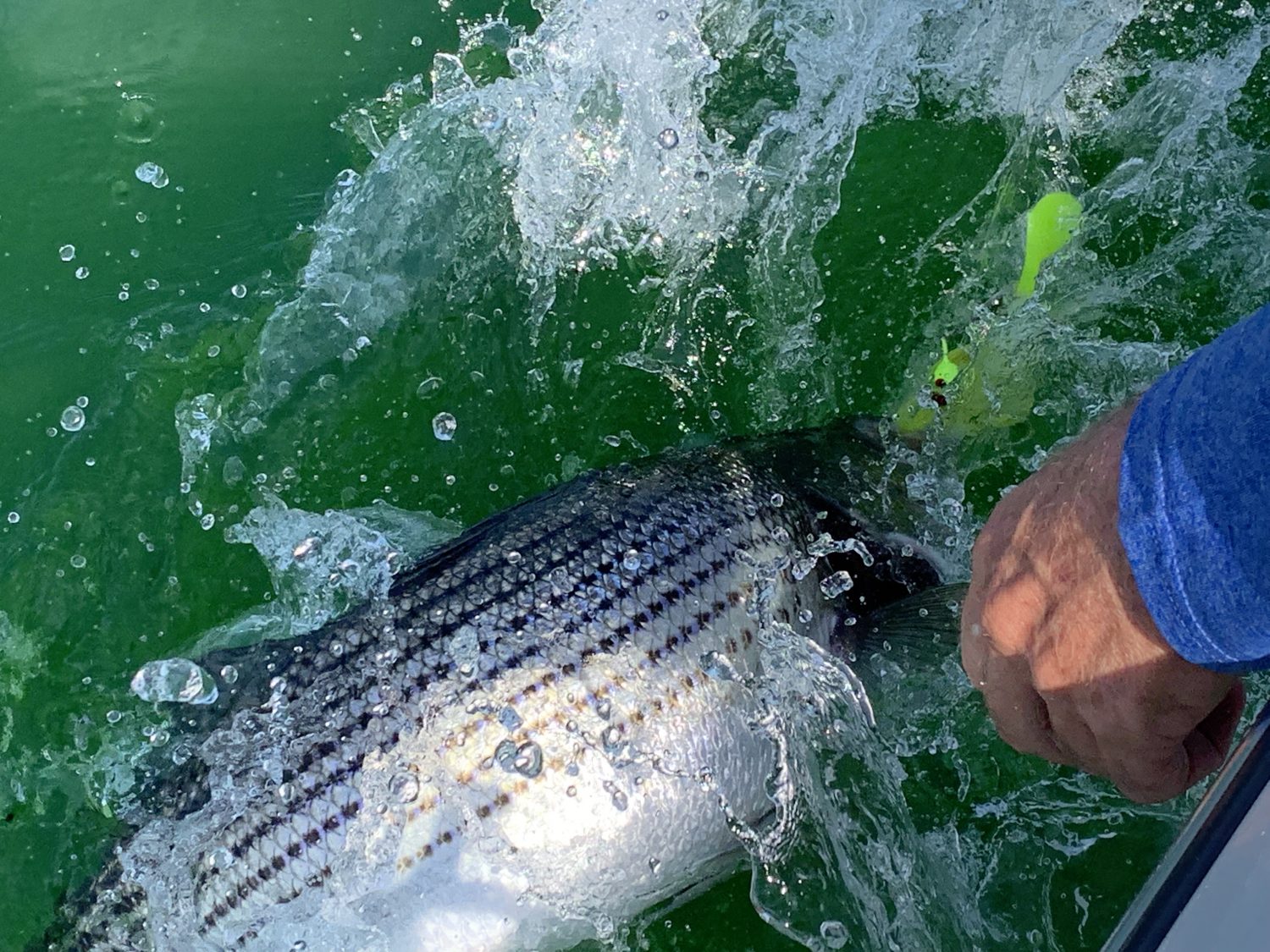 Labor Day Weekend! I hope everyone enjoys some down time and gets to spend an extra day or two on the lake. Yes, the lake will probably be crowded, but ﬁshing is good and even with the increase in boat trafﬁc the ﬁsh will most likely still be very catchable. An early start will negate some of the trafﬁc, so get up, get on the water, then head to the house to take in some good football! Last weeks preview of fall weather dropped the water temps into the low 80’s, but they have rebounded and as of Thursday the surface temp was around 84. The lake level is trending down, falling .30 feet last week to a level of 1069.90 1.10 feet below full pool.

Striper ﬁshing is still very good, Lanier typically ﬁshes well in August and this year lived up to expectations. Look for the ﬁsh to be cruising over the major lower end creek channels and the river channel. In most of these areas you will have no trouble marking ﬁsh, many of them in 25 to 35 feet, with other ﬁsh as deep as 70 to100 feet. The key is to locate areas where the density is greatest, or to set up on a group of ﬁsh and try and get them ganged up under the boat. Drumming, even using some chum(save the spent Herring for this purpose)to pull them to the bait and keep them there. The ﬁsh will respond to down lines, free lines and power reeling, and I believe the power reeling bite has improved quite a bit in recent days. Big spoons and jigs are both effective.

On the live bait, keep a close eye on the baits, they can be tough to keep alive on the hook, take extra baits and change them out as needed, it will make a difference! Trolling remains a very strong technique, the Capt. Mack’s Underspins, Chipmunk Jigs, Fat Spoons and Mini Mack’s being very productive. Pull all of the above on Lead core or on the down rigger, and don’t fall into the trap of ﬁshing too deep, especially in the early am hours. If I had to pick a a distance on the lead core, I would ﬁsh any of the above between 240 and 300 feet behind the boat, shallower in the morning than getting deeper as the day progresses. I am also getting a fair number of ﬁsh to take a bait on RPM Changes and turns, so that change of pace may get you some extra bites.

One question that has been brought to light concerning the Mini Mack is how deep is it ﬁshing? The total weight of the bladed Mini is just under two ounces, but with the extra drag created by the blades, arms and grubs, it ﬁshings slightly shallower than a 2 oz jig. I think as a very general rule, the Mini will run about 3 to 3.5 deep for each color of lead core, at 3.0 MPH.

With so many ﬁsh spiked up in the 25 foot range, umbrella trolling has been very effective. The Capt Macks 4 arm, 9 bait buck tail rig and the pro series are both good choices. Drop the rigs back 120 to 140 feet behind the boat and if you are marking the ﬁsh the bite should not take long. As with the lead core trolling, RPM changes and starts/stops may get a few extra bites!

Bass ﬁshing has been good, with the standard deep water patterns producing well, along with a little topwater thrown in. Casting your favorite topwater over a brush pile will pull a few ﬁsh to the surface, early is the best and wind will also be very beneﬁcial to this pattern. We also have some ﬁsh being taken shallow in the backs of the creeks, last week’s cooler weather probably aided that pattern, with temps in some of the creek backs falling below 80 degrees.

You may want to try a buzz bait, or some small topwater in these creek backs, cast to shoreline structures or anomalies on the bank, if the ﬁsh are there they will respond quickly! The drop shot/shakey bite is still a primary pattern, deep brush, 25 0to 40 food ditches and ledges, and timber edges are all likely areas. Don’t forget the spoons on these same areas, a 1.0 or .60 Flex It Spoons is a good choice as a primary bait or a change up for Drop shot. Some worm colors that have been productive this week are the Roboworm Green Shiner, Morning Dawn, Red Crawl, Morning Dawn Chart, and Aarons Magic.

Be sure and spend some time ﬁshing the main lake humps, especially the afternoon hours, when the Corps is pulling water. I think this will enhance any type of ﬁshing, but it seems to pull the ﬁsh onto the tops of the humps where they are generally very catchable. Worms, Spoons and jigs are good choice to cast at the humps. The water release is generally in the afternoon, to obtain a schedule call the Corps ofﬁce at 770.945.1466.