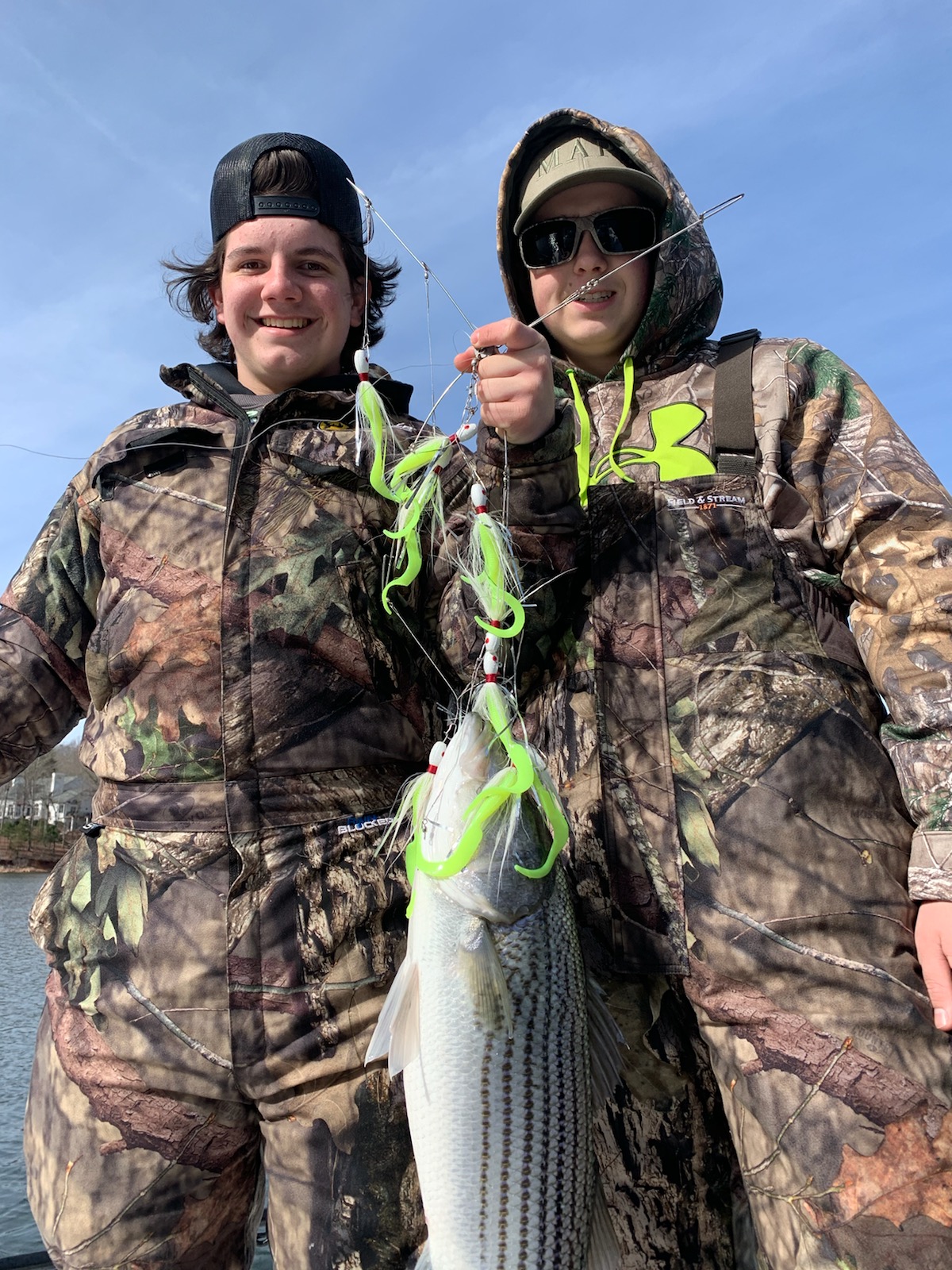 2020 has started out well with a good bite for all species. The mild weather has kept the surface temps a little higher than normal and we are enjoying some March like weather in January! Of course there is a little bit of a downside with the mild weather, in Georgia, you can’t have extended periods of warm temps and dry weather in the winter. So, keep the rain suit handy, because we have plenty of rain in the long term forecast.

For the most part(after Saturday) the indication is for mostly light rain with clouds, weather that is very conducive to good ﬁshing! The lake level is on the rise with our recent rains to and is currently at 1069.68, 1.32 feet below full pool. The surface temps are a seasonally warm 53 degrees.

2020 has been a very good year for Striper ﬁshing! Ok, I know we are only two weeks in, but hey, you gotta love the great start. Down lines are probably the biggest producers, with full size umbrella rigs and Mini Mack’s also catching some good numbers. I am going with the live bait as the most proliﬁc technique simply because we have so many deep ﬁsh, depending on where are ﬁshing, the timber makes trolling in deaths of 40 feet plus difﬁcult. If you can locate ﬁsh over clean bottom, deploy the mini to the depth where you see ﬁsh.

All you need is a small area because stealth trolling involves low speed, allowing you to ﬁsh in tight patterns in small areas, at least relative too trolling on the big engine. You can also create a trail on your chart, to avoid the trees. Troll over an area with the Mini’s up in 20 or 25 feet, ﬁnd a trail that avoids the trees, then deploy the Minis to the desired depth and follow the designated trail. Pulling the full size rigs is also effective, concentrate on getting the rig into 18 to 25 feet over ﬁsh in the 15 to 30 foot range.

Contour trolling down the banks or into the creeks and drains, especially in the upper parts of the lake is also effective. If you see the deeper ﬁsh, you can always clear the rigs and deploy the down lines. The primary pattern for the live bait is to set up in the creeks and drains over deep bait and send ‘em a herring. As always, hang the baits where you see the greatest activity, but dropping the sinker to the bottom and reeling up a couple of cranks has been a strong pattern.

Shorter leaders, 3 to 5 feet may also get a few extra bites. Herring are probably the best baits, but small trout have also been working well and mixing a few shiners in will not be a bad idea. We have not seen the ﬁsh really lock into the small baits, probably because of the warmer than normal temps, but keeping some in the spread would not be a bad idea.

The shiners may be a plus if you encounter some of the many types of smaller ﬁsh that also roam around these deep bait schools such as Perch or White Bass. If you just want to catch ﬁsh, these smaller baits can be effective on the two perch and the White bass and may even get you a bonus Walleye.

Bass ﬁshing remains good, really no changes in recent weeks, with the drains, ditches, ledges and bluffs all being good structures to target. With the water temps holding at a slightly above average values, we have several other patterns that will produce as well, but ﬁshing those deeper structures 25 to 50 feet, seem to offer the most proliﬁc and consistent bite. The overall best producer is probably still the worm on the shakey, but a jig will also be quick to get the bite.

Keep your favorite spoon tied on, a .60 ﬂex-it will be hard to beat but on some days the smaller sizes may produce best. Traditional vertical jiggling may produce well, but on areas with clean bottom try the “reel and kill” method. Cast the spoon, let it hit the bottom, then retrieve by lifting the spoon or a couple quick turns of the reel handle and then let the spoon sink back to the bottom on a relatively tight line. Another bait that does very well for this application is the Capt. Mack’s Game Changer. The game changer is nothing but a spoon with a blade attached to the rear of the spoon, and it is excellent for the “reel and kill” technique. Using this method allows you to cover greater volumes of water, and it gives the ﬁsh a different look and the bait falls differently than what they are used to seeing.

As is the case with vertical jigging, the bite will usually occur on the fall, and is often very subtle. Be on top of your game or the ﬁsh will grab your spoon and blow it out before you can react. Rocks are still very productive, maybe you need to ﬁsh just a little deeper than in past weeks. Bluffs, rock points or free standing areas of rock off of points and ﬂats are good areas to target.

The biggest challenge of ﬁshing the bluffs is saturation. These areas are often very physically large in terms of square footage, so either ﬁnd an anomaly along the bluff that may concentrate the ﬁsh, or just slow down and work them out. Slow is the key here simply because ﬁshing most baits with a quick retrieve will pull the bait away from the face of the rock and subsequently away from the ﬁsh.

Worms and jigs are the standards on the bluffs, however, on some days when the ﬁsh are really active, pulled up shallow and willing to chase, spinnerbaits and crank baits can also be good choices. Regardless of your choice of baits, getting tight to the rock and using a parallel retrieve may increase your odds!