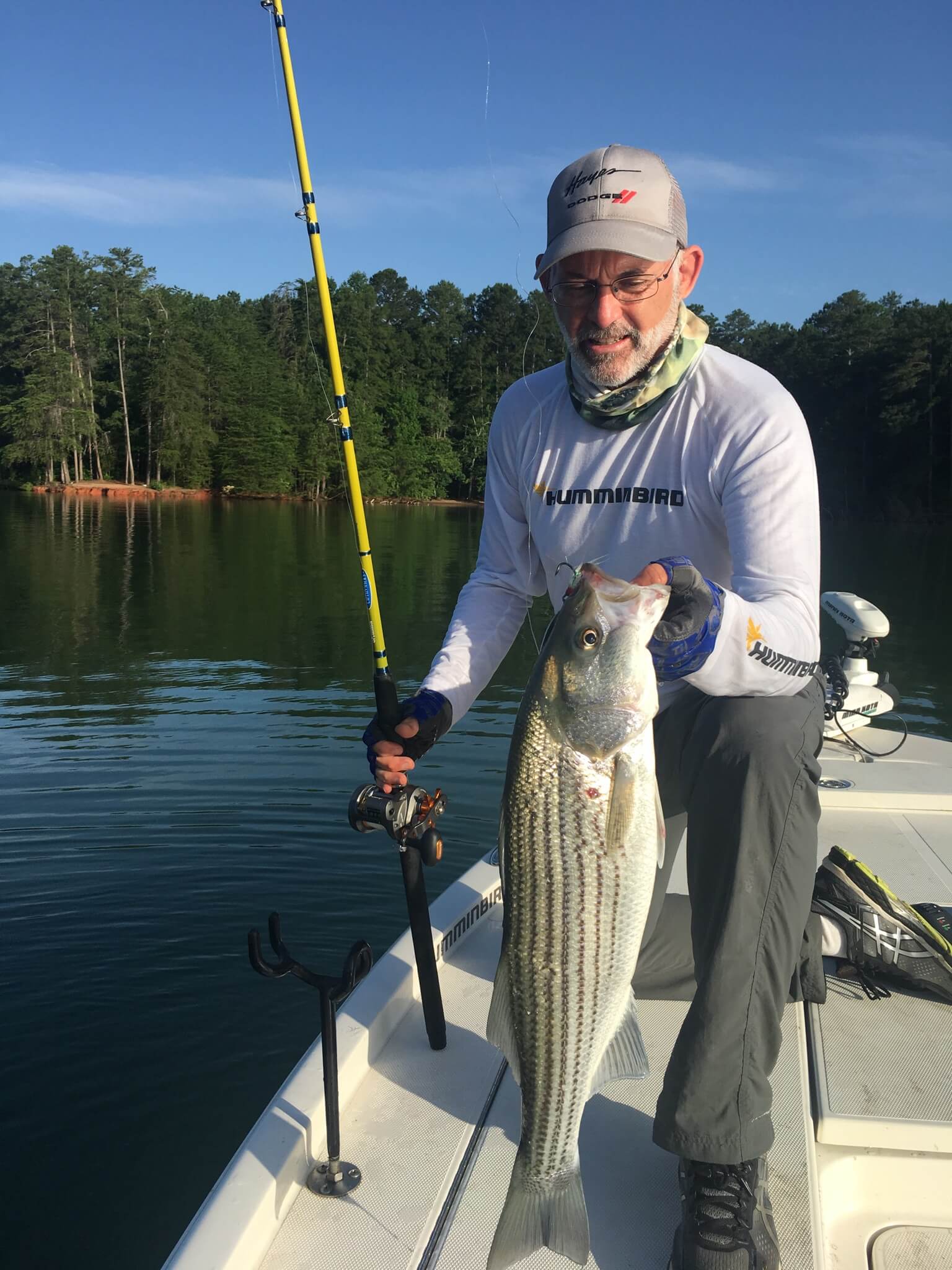 Summer ofﬁcially arrived at Thursday at 6.07 am, the longest day of the year with over 14 hours of sunlight! It certainly felt like summer with air temps in the 90’s most of the week, and water temps heating up to 85 to 86 degrees.

The ﬁsh are responding accordingly as we have moved into summer patterns and techniques for all species. The lake level is 1072.22, 1.22 feet over full pool Striper ﬁshing improving overall last week with the ﬁsh beginning to group up a little more and move towards deeper water and traditional summer techniques. We have a couple of good patterns going on, so here are some things to try as you get out on the lake. There are lots of ﬁsh pushing back into pockets and drains, as far back as a 30 foot bottom, especially in the early part of the day. This is a productive way to ﬁsh, but you will need to keep moving, many of the drains and galleys will not hold ﬁsh so keep looking until you ﬁnd them, Also, you may only see a couple of ﬁsh(use the side Imaging to help determine how many ﬁsh are in a drain)but often that will turn into a group of ﬁsh once you drop the baits.

Keep a spoon or a jig handy for power reeling, the ﬁsh have responded well to this technique. Power reeling allows you to get something into the ﬁsh quickly, getting their attention before they have a chance to leave. Have someone start power reeling asap, and someone else sending down the downlines, use the two in conjunction to maximize the bite. We do have some ﬁsh moving out over the creek and river channels, but you’ll probably ﬁnd that these ﬁsh are really scattered, but catch-able, especially trolling with lead core line.

No surprise on the trolling baits, A Chipmunk jig or a big spoon will both get the bite, 8 colors has been the number that that is of course subject to change on any given day. Keep the power reelers and the down lines handy in the open water as well, if you see any decent congregation of ﬁsh clear the trolling rigs and send down the Herring and the jigs! Either of these patterns may be the best in the afternoon and evenings.

Bass ﬁshing is also good, traditional patterns here, the ﬁsh are loading up in 20 to 30 foot brush, its just a matter of knowing where your brush is and ﬁnding the bait/method that is best on any given day. Top waters are still a great choice here, and to maximize this bite it helps to know where the brush is so you can cast directly over it. If you cast the bait directly over the pile, the bite is usually quick, ﬁrst cast in many cases, so you can catch the easy ones and move on to the next pile. If the ﬁsh do not respond to the top waters, try slow reeling a Spy bait, Steelshad, Fish Head or swim bait over the tree, this subsurface presentation will often coerce the ﬁsh to bite if they are not active enough to run down a surface bait. A drop shot either cast to the tree or dropped directly into the brush is also a very productive method right now, and in terms of consistency and numbers may be the best overall technique.

With the Corps of engineers using an aggressive generating schedule, we have some good ﬁshing that coincides with the water draw. This has mostly been and afternoon/evening event, so you might want to plan some late day ﬁshing. Often, when they are pulling water at the dam, the Bass will pull up on the humps, often over clean bottom and generally they are there to feed. Humps on the main lake in 15 to 25 are the target, maybe even as shallow as 8 to 12 foot humps after dark. The same night baits I have been mentioned the last couple of week, Norman DD2, the Spro Little John, or the big bladed night time spinnerbaits. Worms are always a good choice, and after dark the larger proﬁle plastics may get a better response. Robos in the 7” patterns, and Zoom trick Worms work well here, darker colors are generally the best.

We still have a pretty good Crappie bite, perhaps a little slower than in recent weeks, but relative to the calendar ﬁshing is good. Main lake brush in 15 to 30 is the staple, hair jigs or minnows on a slip cork are the go to baits. After hours ﬁshing, primarily under bridges or around deep submerged dock lights can be very productive, and a nice way to beat the heat. Live Minnows on the down rod are the preferred bait, but small hair jigs will also work under the lights. If you pull some Threadﬁn Shad said up to your lights, and most nights you will, net some of the smaller ones and throw in the bait bucket, they are often very good baits for the crappie.